CMC Corporation (stock symbol: CMG) has just held the 2019 Annual General Meeting of Shareholders for report on financial performance in 2018 (from 1 April 2018 to 31 March 2019) and the plan for 2019. According to the plan approved by the General Meeting of Shareholders, CMC will pay dividends in 2018 with a payout ratio of 15% in cash and 4.088% in bonus shares (total dividends and bonus shares to be received by shareholders are more than 19%) .

The 2019 Annual General Meeting of Shareholders of CMC Corporation just took place on the morning of 26 June 2019 at CMC Building - 11 Duy Tan, Hanoi. The contents of the meeting include the presentation of operation reports in 2018 of Board of Directors (BOD), Board of Management, Supervisory Board, audited financial statements in 2018, profit distribution in 2019, business plan for 2019 and reports on: issue of bonus shares for existing shareholders, issue of private shares for strategic investors, adjustments to ESOP in 2018, dismissal and election of additional members to the BOD for the 2016-2021 term, etc. 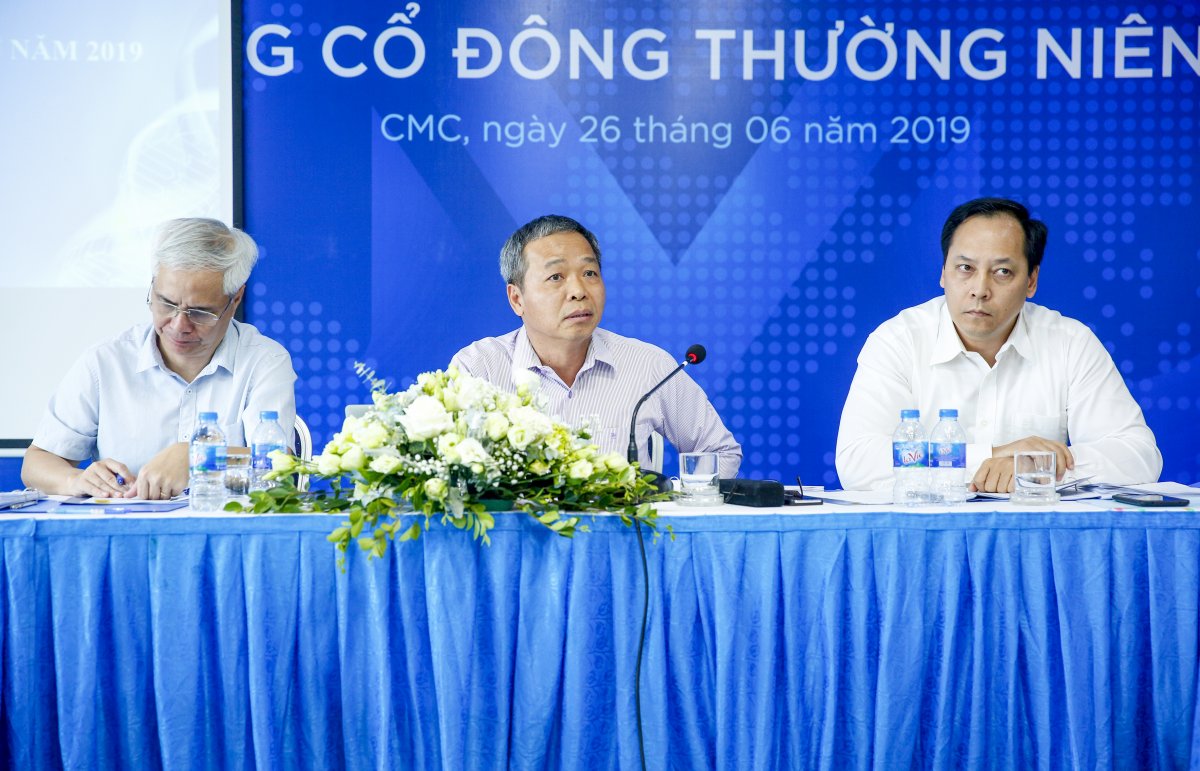 In 2018, the total consolidated revenue of the Corporation reached 5,185 billion VND (excluding revenue from affiliates, associates and internal revenue), grew by 6% compared to 2017 and completed 92% of plan. Consolidated profit before tax reaches 261.8 billion VND, increased by 20% compared to the previous year and completed 102% of plan. Profit after tax distributed to CMC is 133.8 billion VND, completing 107% of annual plan and increased by 9% compared to 2016. In 2018, the Global Business branch achieved the highest revenue growth rate (cumulative revenue in 2018 reached 170.3 billion VND, grew by 95% compared to the same period last year and completed 90% of the plan), marking a strong development regarding foreign markets such as Singapore, South Korea, Japan, Australia and Europe. The Telecommunications branch still maintained the highest profit growth rate (telecommunications profit reached 206 billion VND, grow by 18% compared to the same period last year and completed 90% of the plan), due to the fact that CMC Telecom has pioneered in the creation and introduction of "CMC Cloud Ecosystem" - Vietnam's leading cloud ecosystem which provides direct data connection to AWS, Microsoft Azure, Google and IBM. As of the end of fiscal year 2018, the number of employees of CMC Corporation is more than 2,800 people, in which many have been conferred world-class professional certificates, such as: Project Management Professional (PMP), Microsoft Certificated Solution Associate, Microsoft Certified IT Professional, Certified Ethical Hacker…

In 2018, CMC Corporation has also further promoted the investment in technology infrastructure. The key project of the Corporation last year was CMC Creative Space (CSS) - a complex of office building and data center at Tan Thuan Export Processing Zone (District 7, HCMC) with an area of 13,133 m2 and a total of 1,500 billion VND was invested in the project, including the Data Center. According to plan, CCS project will be completed in September 2020. In 2018, an investment of more than 326 billion VND was also made for telecommunications infrastructure, particularly to establish new POPs in Hanoi and Ho Chi Minh City, upgrade POP system to Hong Kong and Singapore, deploy DWDM Metro and the transmission system to Quang Ninh, etc. At the same time, the Corporation also made strategic investments in solutions of integration to Cloud system, information security and confidentiality, MES (a project for Samsung), land management, electronic invoice, research on Big Data/AI, BlockChain, IoT, etc.

At the 2019 General Meeting of Shareholders, the BOD of the Corporation has approved the profit distribution plan for 2018 and paid dividends in 2018 at the rate of 15% in cash, and issued bonus shares for existing shareholders at the rate of 4.088%. Thus, the total dividends and bonus shares received by shareholders are over 19%. The BOD also voted to approve the adjustment of number of preference shares issued to employees (ESOP) in 2019-2021, to 3,600,000 shares, the issue of 25 million shares according to private offering plan for the strategic investor - Samsung SDS, the dismissal and election of additional members to BOD in 2016-2021 term. Accordingly, Mr. Hoang Ngoc Hung resigned from the position of Vice Chairman of the Board, and the Board agreed to elect Mr. Ha The Vinh a member to replace the newly dismissed one.

Mr. Ha The Vinh (right) is elected a member of the Board of Directors of CMC Corporation.

In fiscal year 2019 (1 April 2019 - 31 March 2019), the BOD of CMC Corporation sets the target of 6,442.5 billion VND of total consolidated net revenue and 304.9 billion VND of consolidated profit before tax. In the next 5 years, CMC aims at becoming a global, world-class corporation with revenue of 1 billion USD and personnel of 10,000 employees in 2023, reflecting the desire to conquer and lead the digital transformation as well as the desire to come out on top, just like the new slogan of the Corporation: “ Aspire to inspire the digital world”.